The BC Women’s Curling Tour is over, but an out-of-province event has the potential to alter the results.

The women’s tour closed at the end of the Sunset Ranch Golf Women’s Cashspiel at Kelowna Curling Club on Monday, Nov. 11.

And while two berths for the Scotties BC Women’s Curling Championship presented by Best Western, were up for grabs for the top finishers, questions remain about who will get them. That is because there is also a CTRS berth available, and results won’t come in until after this weekend, and that could shake things up.

Team Brown, from Kamloops, sit at the top of the tour standings with 58.5808 points, but are also top of the Canadian Team Ranking System (CTRS) table, with 92.844 CTRS points. It means that Team Brown have easily secured a berth. But it remains to be seen which one.

If another BC team does well at the Red Deer Curling Classic this weekend, it is technically possible for them to surpass Team Brown in CTRS points.

However, it will be an uphill battle for the other BC teams because the Kamloops foursome had a fantastic weekend. The team of skip Corryn Brown, third Erin Pincott, second Dezaray Hawes and lead Ashley Klymchuk were not able to compete in Kelowna as they were playing in the Pinty’s Grand Slam of Curling tier 2 Kioti Tractor Tour Challenge event in Nova Scotia. They made it to the semifinal round but were knocked out by Ontario’s Team Murphy. In the process they have now amassed a 60-point CTRS lead over the other teams looking for the CTRS berth.

Back in BC, Team Wark from Abbotsford finished the BC Women’s Curling Tour with 51.9631 points. However, the team of Sarah Wark, Kristen Pilote, Carley Sandwith and Jen Rusnell will be returning to the BC Scotties as defending champions, so will not be seeking a berth from the tour.

The men were in action this weekend as well, with two BC Men’s Curling Championship berths up for grabs. But the final BC Men’s Curling Tour standings will also not be known until later because they will be able to compete in an additional tour event. Currently, Team Tardi from Langley are in the lead with 48.9864 points, followed by Team Wenzek from Royal City with 47.2102.

Team Cotter, from Vernon, sit in third place with 46.8605 points. They will return to the BC Men’s Curling Championship as defending champions, so they will not be in the race for the two tour berths. Skip Jim Cotter is joined by Steve Laycock, Andrew Nerpin and Rick Sawatsky.

Abbotsford’s Sean Geall, and Kelowna’s Jeff Richard are also on the hunt for a tour spot.

The men’s tour event that has yet to be played is the Ashley Home Store Curling Classic in Penticton from Nov. 22-25, 2019.

BC Curling Tour standings and team rosters are available at https://www.bccurlingtours.com/.

Regional and open playdowns will decide the remaining berths for the men’s and women’s BC championships. Follow the scores for the qualification events and the provincials at https://playdowns.curlbc.ca. The men’s event is a 16-team triple-knockout and the women’s event is an 8-team round robin. 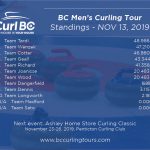 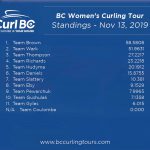