The qualifiers, which will run concurrently for both women and men, will take place at the Delta Thistle Curling Club, starting this Friday, December 9th and run through Sunday, December 11th.

While this weekend’s open qualifiers are the only route remaining to the 2023 BC Scotties and Men’s Championships, Presented by Best Western, there were other avenues BC Tops Women’s and Men’s team took to qualifying during the preceding weeks.

Additional automatic berths were also allotted to Canadian Team Ranking System (CTRS) points leaders. For the men’s championship, those berths will go to:

And for the women’s championship, the CTRS berths will be awarded to:

Finally, championship berths were also awarded through the BC Curling Tour to both the eligible men’s and women’s winners at the Kamloops Crown of Curling in October, and Dawson Creek’s Mile Zero Cashpiel in November.

The men’s berth spiel winners were: 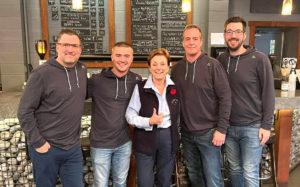 And for the women:

Live score for the event in Delta along with the schedule and rosters can be found at: http://bot.curlbc.ca//web/

The lounge will be open for spectators to enjoy BC top teams vying for a berth in Chilliwack.