Teams Dennis & Schmidt Triumphant at the BC Club Championships in Trail

During the past four days, the Trail Curling Club played host to the 2022 BC Club Championships, Presented by Original 16, and the Kootenays were treated to some exceptional skill, daring strategy, and all-around great curling.

The event saw five women’s teams and nine men’s teams compete for their respective championships over the course of ten draws, with a trip to November’s 2022 Everest Canadian Curling Club Championships on the line. 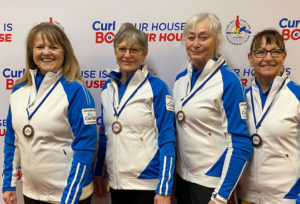 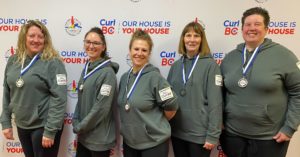 After three days of intense play and good camaradarie, the final three teams met on the ice on Sunday with a semi-final followed by final game. In the women’s final, it was the undefeated Team Dennis (Skip: Kim Dennis; Third: Heather Beatty; Second: Allison Dentoom; Lead: Jennifer Gauthier) representing the Delta Thistle Curling Club Vs. Castlegar’s Team Hicks (Skip: Susan Hicks; Third: Randi Ludwar; Second: Michelle Kooznetsoff; Lead: Shelly Van Yzerloo) who went 3-1 in the preliminary round. Team Dennis dominated the final game from the get-go, racking up five points in the first two ends. While Hicks countered in the third by putting one up on the board, it was too little, too late. Dennis kept the pressure on, ran up their score even more, and ended the game 8-1, with handshakes at the end of the sixth end. Members of Team Dennis were part of the 2017 Travelers Curling Club Championship Gold Medal teams when they represented Richmond Curling Centre as Team BC at the Nationals. 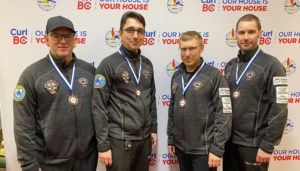 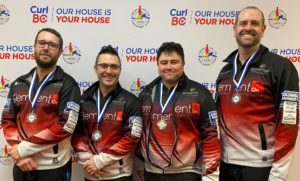 The men’s final, which pit Team Schmidt (Skip: Ron Schmidt; Third: Norm Cote; Second: Randy Baert; Lead: Mike Meeres) and Team Gomes (Skip: Chris Gomes; Third: Patrick Prade; Second: Brian Cole; Lead: Martin Perry) against each other, saw a similar strong start for one team, with Schmidt scoring four points in the first two ends. Gomes owned the next two ends with one point apiece, but then it was a Schmidt 3-ender in the fifth that put them in the driver seat. Not ready to go down, Gomes clawed back with a deuce in the sixth, but Schmidt was able to close the book with three more points in the seventh. It was handshakes after that, with a final score of 10-4 for Team Schmidt representing the Comox Valley Curling Club. Comox Valley last won this BC Championship in 2016 when it was known as the Travelers Curling Club Championships. 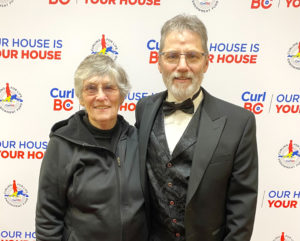 Chief Umpire Jeannie Longhurst and Chief Ice Technician Mike Williams, who is retiring at the end of the month and went formal for his final championship.

Full results of the event’s four days are as follows:

Teams Dennis & Schmidt Triumphant at the BC Club Championships in Trail