There was a hot time in Kamloops this past weekend, as some of BC’s best curlers—including several former BC Scotties and Men’s champions—converged on the Tournament Capital for the Crown of Curling.

The event saw 11 women’s teams and 16 men’s teams do battle at the Kamloops Curling Club, in search of both glory and a $15,000 purse—as well as a berth at this year’s BC  Scotties and Men’s championships.

On the women’s side, Team Diane Gushulak defeated Team Sarah Wark in the A Qualifier, and moved directly to the Semi-final round of the playoffs.  The women’s “B” bracket saw Team Holly Hafeli, and Team Corryn Brown advance to the playoffs. Team Brown defeated Team Hafeli on Saturday Night in an all-Kamloops showdown which qualified them directly into the semi-final round. Team Kaila Buchy, Team Sarah Wark and Team Shawna Jensen qualified via the  “C” bracket.

The two quarter-final matchups saw Team Buchy wallop Team Wark 9-3 in 6 ends, and Team Jensen defeat Team Hafeli in a nail-biter that required an extra end for Team Jensen to seal the deal.   The semi-finals saw Teams Gushulak victorious over Team Buchy by a score of 5-3 in 8 ends, and Jensen was defeated by home town favourite Team Brown with a 6-5 victory that required an extra end to claim a berth in the championship final.

With Teams Gushulak and Brown winning their semi-final games, the stage was set for the women’s championship final, and a berth in the 2023 BC Scotties, Presented by Best Western on the line.  Team Brown defeated Team Gushulak 7-5 in a hard-fought game that saw team brown scoring 2 in 8 for the Victory with the all-important hammer in the last end.

Winning this event—and its BC Championship berth—means a fifth trip for Team Brown to the Scotties BC Women’s Championship, Presented by Best Western, taking place in Chilliwack from January 10th-15th, 2023 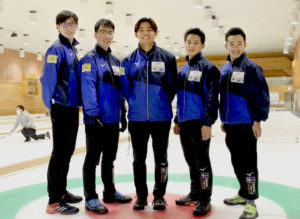 On the men’s side, the end of triple knockout play saw Teams Brent Pierce and Team Sebastien Robillard qualify via the “A” bracket and Teams Cody Tanaka , Matthew McCrady, and  Calder Fadden advance to the quarter-finals through the “B” bracket, finally  Teams Cameron de Jong, Hayato Sato  and Jason Montgomery advanced through the ‘C” bracket. When the dust settled after the quarterfinals, it was  Team Pierce, Robillard, Sato and Tanaka left to battle for prize money and a berth to the 2023 BC Men’s for eligible teams.

Out of final four, Team Sato and  Team Pierce emerged victorious and moved on to the championship final—the third BC curling final for Team Pierce if three events. After a battle which see-sawed in score all the way up to the eighth end, Sato defeated Pierce by landing a deuce, and the championship victory, by a score of 6-5.

While Team Sato’s skip, Hyato Sato, is a former BC resident, the team curls for Japan, making them ineligible for the BC Championship berth, which can only be awarded to BC teams. The berth in question will now revert to the open qualifying event, which will be held from December 9th to 11th at the Delta Thistle Curling Club.

Congratulations to everyone who played at, worked on, and volunteered for the Kamloops Crown of Curling—it was a thrilling event from start to finish.