Teams Brown, Pierce, Reese-Hansen, and Tanaka sizzle in Draw 9 of the 2023 BC Scotties and Men’s

Playoff weekend has begun at the 2023 BC Scotties Women’s Curling Championships with both the Page 1vs2 and Page 3vs4 games taking place.

A-Qualifier Team Brown (Kamloops, Penticton) met up with B-Qualifier Team Grandy (Vancouver) for a rematch of their game in the A-Event yesterday afternoon. It was a high-scoring affair, highlighted by a huge score of six points by Team Brown in the sixth end. Team Brown took hold of the game after that and booked themselves a spot in Sunday’s championship final with a score of 12-8.

Team Grandy utilizes the extra life they earned by qualifying in one of top two spots to try to earn their spot in the final via the semi-final.

While both C-Qualifiers were glad to be in the playoffs, the game was intense as there were no second lives available for these two teams. Team Reese-Hansen (Victoria, Kamloops) and Team Ryan (Golden Ears) knew they needed to keep winning to keep the Team BC dream alive. An extra end was needed to decide this one. Team Reese-Hansen made a fantastic runback in the extra to set up the steal, winning them the game 7-6.

Team Reese-Hansen put themselves in tomorrow’s semi-final at 2:00pm against Team Grandy. 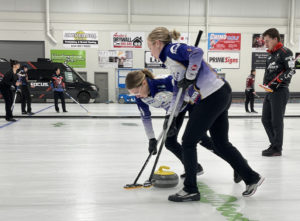 Team Brown sweeps their way into the BC Scotties final

Even though the playoffs hadn’t started in the 2023 BC Men’s Curling Championship, the action was still sizzling hot as the last two playoff spots were up for grabs through the C-Event.

The first C-Qualifier game had Team Tanaka (Royal City, Richmond) face Team Robillard (Royal City, Nelson). Both teams were coming off wins this afternoon and were entering their third straight game of the day. The momentum was in Team Tanaka’s favor for all eight ends this game lasted, leading them to an 9-4 win.

The second C-Qualifier was the last chance for defending champions Team Pierce (Royal City) to qualify for the playoffs after failing to do so in both the A- and B- Qualifier games. Only Team de Jong (Victoria, Penticton, Vernon) stood in their way. Team Pierce wouldn’t let the playoffs slip away again, claiming their spot with a 10-5 win. 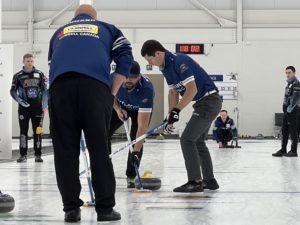 Team pierce punches their ticket to the men’s playoffs

Team Tanaka will face Team Pierce in the Page 3v4 game. The Page 1v2 game will feature Team Gauthier (Victoria) and Team Cotter (Vernon, Kelowna, Kamloops). Both games will be played at 9:00am tomorrow morning.

As the championship picture comes a little more into focus, we would like to recognize our incredible officiating team led by Chief Umpire Henry Wong, and Deputy Umpires Derek Smith and Richard Huebner. Thank you for highlighting the importance of fair play!

Catch all of the action on www.youtube.com/@CurlBCTV/streams.

This event is supported in part by grants from the Province of British Columbia, Hosting BC, Tourism BC, and viaSport BC.

Teams Brown, Pierce, Reese-Hansen, and Tanaka sizzle in Draw 9 of the 2023 BC Scotties and Men’s