New champs take the lead at 2022 BC Stick Championships

The McArthur Island Curling Club was the site of the both the 2022 BC Open Stick Championship and the 2022 Women’s Stick championship, and the event brought great curling, exciting games, and close finishes to Kamloops.

The Open saw eight teams competing over seven draws, a qualifying game, and playoffs before reaching the championship.

Draw eight came on Sunday morning at 10:00am, in which Schwartz/Schwart defeated Prokopetz/Wejr 3-2 in six ends.

The 11:30am draw nine was a blowout which saw Mould/Shalansky take Schwartz/Schwartz 7-1 in four ends.

In the grand finale, at 1:30 on Sunday afternoon, Sears/Heinrichs handed over the lead in the second end, leading to a 6-5 Mould/Shalansky championship victory. 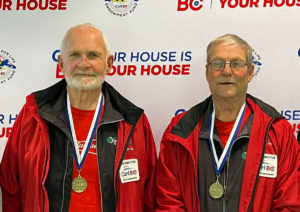 At the BC Women’s Stick Championship, held simultaneously at the McArthur Island Curling Club, five teams battled it out across ten draws.

Because the Women’s championship had fewer teams than the Open, they began play in draw two, on Friday morning. Right out of the gate, Gerri Creyke and Carole Knopp (Team Ender/Beans) defeated Louise Burton and Kathy Saul-Fowler.

Draw three, Friday afternoon, saw Ender/Beans win 6-5 in their contest with Sheron Sears and Carol Heinrichs, and Margaret Campbell and Tammy Hughes triumphant in their match with Deb McLaughlin and Dianne Mouncey, 6-3.

Later in the afternoon, Sears/Heinrichs defeated McLaughlin/Mouncey 5-3 in draw seven.

Sears/Heinrichs had a great Sunday morning, sending Burton/Saul-Fowler packing 6-2 in draw eight, followed by a 9-2 victory over Ender/Beans.

They ran out of gas in the afternoon, however, when they met Campbell/Hughes in the final game of the event. Despite both teams keeping pace at first, Campbell Hughes had a great fifth, leading to a championship win over Sears Heinrichs, 5-4. 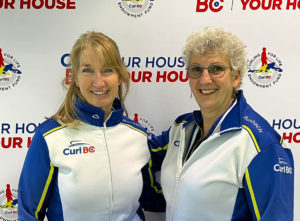 New champs take the lead at 2022 BC Stick Championships