Fernie Curling Club held its first evening of curling on Oct 28 after two years without ice.

Kevin Giffin, the icemaker at the club, said everyone was super excited that registration was at a record level despite the two-year hiatus.

The club was closed in the 2017-18 season after a horrific ammonia leak at the ice plant shared by the skating arena and curling club. The leak led to the death of three men.

Giffin said: “The accident two years ago was devastating to the community and led to the arena being shut for one season and the curling club being shut for two years. A lot of effort was put into getting the club ready for a new season last year – and our registration was going strong, but there were problems getting the ice in, with brine leaking through the floor. We just couldn’t make ice.

“We were worried that because we had to close for the second season, people would forget about curling. But that has not been the case. We have had record registrations.”

The curling club and arena now share a new Freon ice plant that is located externally to the building. They have also installed roll-out PVC piping along the floor where the sheets are located. The water is then frozen on top of that piping.

The system is designed to give icemakers better control of the ice temperature.

The first night of curling, on Oct. 28, saw approximately 40-50 people turn out for an open house. The seniors league was also in full swing on Oct. 29, with all four sheets of ice in demand.

Giffin said everyone was really pleased for this fresh start. “Annie Mcfarlane, who is our president, has worked really hard. Everyone is thrilled to be back.”

Mcfarlane added: “The Fernie Curling Club has had tremendous support in getting this up and operating again and truly could not have achieved our first day of curling down on the ice without all the volunteers that worked tirelessly and overcame countless hurdles along the way.” 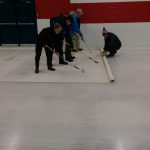 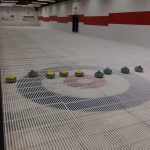 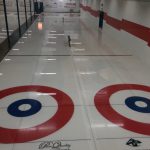 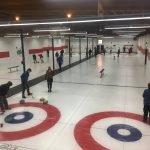 You’re invited to the Curl BC AGM