Draw Six of the BC Scotties and Men’s Championship offers suprises, titanic struggles

Draw 6 saw the first playoff spot filled in the 2023 BC Men’s Curling Championships. The A-Qualifier game was played between defending champions Team Pierce (Royal City) and #16 CTRS-ranked Team Gauthier (Victoria). Both teams were looking to keep their winning momentum rolling to stay undefeated heading into the playoffs. It took an extra end, but with a big steal, Team Gauthier punched their ticket to the Page 1v2 game on Saturday at 9:00am, by a score of 9-8.

In other men’s action, Team Tanaka (Royal City, Richmond) took on Team Montgomery (Victoria) in the B-Event. It was a game filled with intensity that had no clear leader throughout. Team Montgomery blanked the ninth end to keep the hammer coming home in a tied game. The hammer wasn’t enough to secure the win, and Team Tanaka stole the game in the last end with a final score of 6-5.

Team Tanaka will face Team Pierce in one of the two B-semi games tomorrow morning at 9:00am. Team Montgomery falls to the C-Event to face the loser of the other B-semi between Team Robillard (Royal City, Nelson) and Team Cotter (Vernon, Kelowna, Kamloops). That C-Event game is scheduled for 2:00pm tomorrow.

Team Medford (Kimberley, Cranbrook) and Team Geall (Salmon Arm, Penticton, Kamloops) were in a must-win scenario to keep their run towards the BC title alive. Team Geall kept Team Medford to singles on the scoreboard to successfully move on in the C-Event by a score of 7-2.

Team Geall will play the loser of the Team Tanaka versus Team Pierce game at 2:00pm tomorrow afternoon.

Before the game, Team Medford’s Steve Tersmette was awarded the BC Men’s Sportsmanship Award, by vote of his fellow competitors. Steve is a great representative of the sport both on and off the ice.

The women’s side also saw a team qualify for the playoffs through the B-Event. Team Grandy (Vancouver) was once again vying for a spot in the Page 1v2 game after losing to Team Brown (Kamloops, Penticton) in the A-Qualifier game earlier today. However, Team Ryan (Golden Ears) sought to topple the #6 CTRS-ranked team after a 12-7 loss to them less than 24 hours ago. Team Grandy didn’t miss the opportunity to go into the Page 1v2 a second time, securing themselves a rematch against Team Brown tomorrow at 7:00PM.

Like the BC Men’s Sportsmanship award, the Kay Giles BC Women’s Sportsmanship Award was also presented prior to the game. Kristen Ryan of Team Ryan was recognized by her peers as the winner of this award. The award highlights the positive impact Kristen has on the curling community, and her commitment to respect for her fellow competitors. 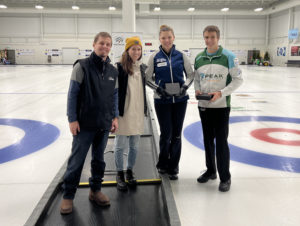 The C-Event also began for the women during Draw 6 with two games on the ice. Team Jensen (Richmond, Royal City) jumped on the ice for their first game of the day versus Team Wark (Abbotsford). Team Jensen made a fantastic soft-weight hit for three points in the last end to win 7-6.

Team Jensen now moves on to one of two C-Qualifier games tomorrow morning at 9:00am against Team Reese-Hansen (Victoria, Kamloops).

Team Gushulak will now play in the second C-Qualifier game tomorrow morning at 9:00am against Team Ryan.

A big thank you to all of the wonderful yellow-shirted volunteers at the Chilliwack Curling Club this weekend. Your warm welcome to Chilliwack kept everyone energized and ready to go. These events would not run without volunteers and you went above and beyond.

Catch all of the action on www.youtube.com/@CurlBCTV/streams. Live commentary with Melissa Soligo and John Cullen starts tomorrow.

This event is supported in part by grants from the Province of British Columbia, Hosting BC, Tourism BC, and viaSport BC.

Draw Six of the BC Scotties and Men’s Championship offers suprises, titanic struggles