Yesterday saw the race for BC’s curling crowns tighten, with more hard-fought battles, more eliminations, and the arrival of the semi-final games and bronze medal presentations. By the end of the day, we were left with just four teams remaining—Teams Cseke and Richard on the men’s side of our championship, and Teams MacMillan and Arsenault left to battle it out for the right to wear the BC jackets for the women.

When the day started, there was still a quartet of men’s teams in contention, Cotter, Tardi, Richards, and Cseke. The day’s first games, the page playoffs in Men’s Draw 12 at 9:00am, saw Team Cotter dispatch CTRS leaders and number-one seed Team Tardi 9-3. Team Cseke—the week’s Cinderella story—defeated Team Richard 7-6 by making an in turn tap to the button in the 10th end of the game with last rock advantage.

The morning also began with three women’s teams still vying for the 2022 BC Scotties, Presented by Best Western—but one would soon be earning the bronze medal. In Women’s Draw 13 action, the semi-final between Team Arsenault and Team Wark at 2:00pm, it was a hard-fought rollercoaster of a battle which saw team Arsenault finally come out on top with a 6-4 win in a struggle that saw them play particularly well in the second half of the 10-end game. Team Arsenault drew for two points in the 9th end of the game giving them a two-point lead in 10. Unfortunately for Team Wark, they were unable to convert their deuce in the 10th end, ending the former BC Scotties Champion’s run in Kamloops this year.

In draw 14, the men’s semi-final, at 7:00pm, it was longtime rivals Team Cotter against Team Richard taking each other on. Team Richard has former world champion Brent Pierce throwing last rock and calling the game. It was a tight effort which saw Team Cotter outplaying Team Pierce in the first half of the game, however Richard broke things open in the fourth when they gained three points with an overcurl on Team Cotter’s last stone. Team Richard would lead the rest of the game being the stronger of the two teams in the last half of the semifinal matchup. In the end, Team Richard punched their ticket to the final with a stunning 7-5 victory over 9-time BC champ Jim Cotter. 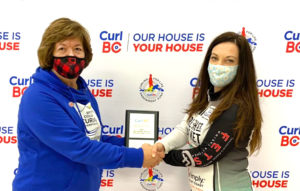 Off the ice, Grace MacInnes of Team Gushulak won the Kay Giles Sportsmanship Award following nomination by her peers. The award was presented by event co-chair Linda Bolton.