Earning their spots through years of volunteer service and hard work, a hand-picked group of four BC umpires will be headed to Calgary to officiate at the Pan Continental Curling Championships, which runs from October 31st to November 6, 2022.

BC’s talented crew will span both divisions of the event: Donna Butler will serves as Game Umpire in “A” Division, and “B” Division will see Patti Caldwell on the ice as Deputy Chief Umpire, Herb Wong as Game Umpire, and Phil McKenzie as Chief Timer.

Joining them in Calgary will be expert BC icemakers Mike Merklinger and Cody Hall, who will be playing major roles at the games as Deputy Chief Ice Technicians. 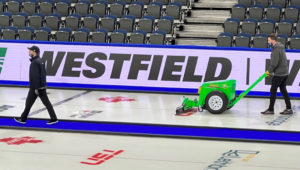 Icemakers Mike Merklinger and Cody Hall working the 2022 Brier at the Enmax Centre in Lethbridge.

Good luck and good curling to all playing, and congratulations to our BC umpires!