The 2022 BC Mixed Doubles Championship really heated things up in Langley over the past four days. In the battle to crown a new BC champion, twenty two-person co-ed teams met up across four pools and eleven draws.

Draw one, on Thursday afternoon, saw all six sheets of the Langley Curling Club in action, with Jenn Routliffe and Darren Frycz win 7-6 over Marilou Richter and Craig McLeod; Kayla Wilson and Matt McCrady 7-5 over Donna Mychaluk and Kevin Jeannotte; Diane Gushulak and Patrick Prade 10-2 over Emma-Gail Woike and Daniel Deng 10-2; Bryelle Wong and Alex Duncan-Wu 11-4 over Sasha Wilson and Alex Horvath; Layna Pohlod and Daniel Wenzek 13-2 over Lori-Anne McGowan and Wayne Moore; and Karly King Simpson and Connar Croteau 8-3 over Regan and Ryan Taylor. 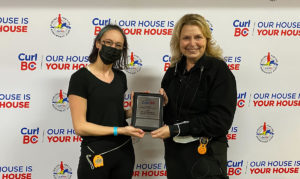 By the time draw five rolled around, on Saturday morning, the field had narrowed. As the remaining teams’ thoughts concentrated on the upcoming final game, Brissette Fadden topped McDonald Cowan 8-3; there was Dezura/Dezura 12-4 over McGowan/Moore; McGillivray/Miron 9-4 over Rees Schellekens; and Mallett/Miki 9-6 over Woike/Deng. 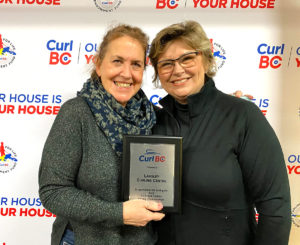 The championship final, which pit Wark/Nerpin against McCrady/Wilson, was an eight-end duel which saw the score see-saw at first, until Wark/Nerpin pulled ahead in the sixth and went on to take the crown. The final score was Wark/Nerpin 5, McCrady/Wilson 4. 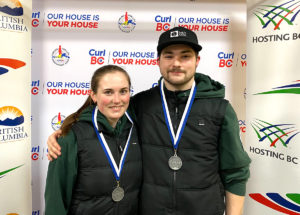