The 2021 BC Curling Club Championships, presented by Original 16, roared into Quesnel last week, offering some exceptional curling and exciting times.

The championships, which were held at the Quesnel Curling Centre from September 29th to October 3rd, saw ten teams (6 men’s and four women’s) go head-to-head for the BC club title, with a trip to national club championships the on the line.

On the women’s side, Team Penny Shantz (with third Tina Chestnut, second Nicole Guizzo and lead Nancy Betteridge) came out of the gate strong and finished with a record of 5 wins and 1 loss. Next was Quesnel’s own Team Brenda Ernst (with third Dana Johansen, second Penni Yamamoto and lead Shari Needham) with a 3-3 record, and Team Shirley Wong (with third Shannon Roberts, second Lena West, and lead Darcy Demchuk) and Team Betty Meade, (with third Karen Lepine, second Claire Morrison, and lead Jamie Waffle) both at 2 and 4.

The stage was then set for a Sunday morning men’s championship battle between Teams Frycz and Gomes, with Frycz taking the crown in tightly-contested 5-4 game. 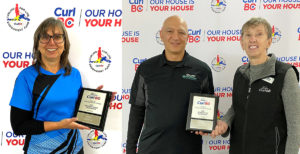 Although neither of the Quesnel-based teams became champion, the home-town crowd did well in the awards category, with Shari Needham, of Team Ernst, and Shayne Yamamoto of Team Service Electric, taking home sportsmanship awards at the end of play.

Teams Shantz and Frycz will both now head to the 2021 Everest Canadian Club Championships in Ottawa, November 24th to December 4th.  They’ll be in good company there, as BC teams have twice won the national championship in recent years, with Team Sawyer victorious in 2017 and Team Shimizu in 2018.